Ever since November 9th, when I read the morning headlines and felt like the air had been sucked out of the room, I've been thinking over how to respond to the news.

My first response was dread, then anger.  I wanted to fight back, but how?  I thought of posting several cutting remarks, such as:


What is the definition of kakistocracy?  Government by the least qualified or worst persons.  Ka-pow!


"No drug, not even alcohol, causes the fundamental ills of society.  If we're looking for the source of our troubles, we shouldn't test people for drugs, we should test them for stupidity, ignorance, greed, and love of power."  (P.J. O'Rourke, b. 1947)  Whammo!


"There is a cult of ignorance in the United States, and there always has been.  The string of anti-intellectualism has been a constant thread winding its way through our political and cultural life, nurtured by the false notion that democracy means that 'my ignorance is just as good as your knowledge.'"  (Isaac Asimov, 1920-1992)  Gotcha!

And while that may feel really, really good, resistance is, ultimately, futile.  Why?

No doubt you have seen people arguing, or even protesters facing police.  This is how it looks: 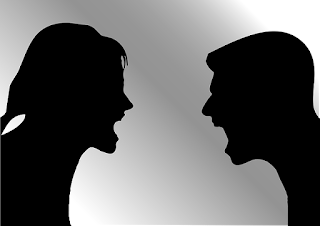 Not pretty, is it?  And you can't really tell who is the aggressor anymore, since both sides have completely stopped listening, demonized the other side, and dug in their heels, avoiding any potential for understanding, compromise, or growth.

So, if we shouldn't resist, what is the appropriate response?

We'll discuss this more next week, but before I leave, here's one final, delicious quote: