Give Peace a Chance, Part 4

And from the master wordsmith on the subject of peace, Martin Luther King, Jr.:

We will not build a peaceful world by following a negative path.  It is not enough to say we must not wage war.  It is necessary to love peace and sacrifice for it.  We must concentrate not merely on the negative expulsion of war but on the positive affirmation of peace.  We must see that peace represents a sweeter music, a cosmic melody, that is far superior to the discords of war.  Somehow, we must transform the dynamics of the world power struggle from the negative nuclear arms race, which no one can win, to a positive contest to harness humanity's creative genius for the purpose of making peace and prosperity a reality for all the nations of the world.  In short, we must shift the arms race into a peace race.

If we have a will -- and determination -- to mount such a peace offensive, we will unlock hitherto tightly sealed doors of hope and transform our imminent cosmic elegy into a psalm of creative fulfillment.

Give Peace a Chance, Part 3

In a time of unprecedented challenge and evolutionary transition we must heal the wounds of the past, engage fully in the transformation of present conditions, and create a future of unparalleled dignity and beauty for all beings and for all life on Earth.  (James O'Dea)

I was once asked why I don't participate in anti-war demonstrations.  I said that I will never do that, but as soon as you have a pro-peace rally, I'll be there.  (Mother Teresa)

Never doubt that a small group of thoughtful, committed citizens can change the world.  Indeed, it is the only thing that ever has.  (Margaret Mead)

Give Peace a Chance, Part 2

More quotes on the subject:

Peace cannot be achieved through violence, it can only be attained through understanding.  (Ralph Waldo Emerson)

I truly believe the only way we can create global peace is through not only educating our minds, but our hearts and our souls.  (Malala Yousafzai)

Posted by Celina Pavan at 10:14 AM No comments:

Give Peace a Chance

"Enough, already."  That's my contribution to the plethora of quotes about peace and the stupidity of war.  But others have been much more eloquent.  Let's savor their thoughts and words on this subject:

Take your light and take your love into the world as the only weapons that we need to make this world truly glorious, truly beautiful, and astonish all of life.  (Hafsat Abiola)

To replace the old paradigm of war with the new paradigm of waging peace, we must be pioneers who can push the bondaries of human understanding.  We must be doctors who can cure the virus of violence.  We must be soldiers of peace who can do more than preach to the choir.  And we must be artists who will make the world our masterpiece.  ( Rev. Paul Chappell)

Peace cannot be kept by force; it can only be achieved by understanding.  (Albert Einstein) 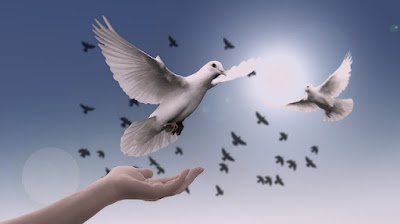 (image courtesy of pixabay.com)
Posted by Celina Pavan at 10:14 AM No comments: