The magic of novels is that they can give you an inside look into a lifestyle or philosophy, as Deng Ming-Dao did in his fabulous book, Chronicles of Tao: The Secret Life of a Taoist Master.  I learned far more about Taoism than I have in any of the other books I've reviewed these last several months.

And why?  Because it portrays a human being, in this case, Saihung, with all his faults and doubts and struggles.  It could go from his internal monologue to his interactions with his Taoist master or his difficulties in maintaining his belief system in the secular world.

And that, for me, is the magic of novels.  I could have written The Gemini Bond as a dry exploration of Twin Souls and how the concept is found in science and nature and mythology, but following Rissa's journey, I thought, would be far more illuminating.  For example:  How does she handle her psychic visions?  What does the recognition of a Twin to another feel like?  What does the aftermath entail?  That is the power of fiction.  It illumines the real in ways that dry academia cannot.

In any case, treat yourself to a novel sometime.  You may enjoy the story, but your heart and mind may transformed by the power of the journey.
Posted by Celina Pavan at 11:14 AM No comments:

We now call into session our latest fan club meeting for the wonderful author, Deng Ming-Dao.  Wow, have I got a book to recommend to you.

I just finished Deng's Chronicles of Tao: The Secret Life of a Taoist Master.  It is comprised of three novellas, The Wandering Taoist, Seven Bamboo Tablets of the Cloudy Satchel, and Gateway to a Vast World.  It was one of those books I just didn't want to end.  It taught me so much.

It follows Saihung, who, as a young boy, was recognized as having special gifts by a Taoist master and who was given to the monastery for training.  The first novella explores how Saihung learned not only Taoist doctrine, but also meditation techniques and martial arts training, along with the everyday duties of a young monk serving his master.  The second novella shows how he became more mature in Taoism, but was sent on a mission which threw him into the low places of China.  The last novella followed him on his travels into the United States.

What I love about this book is that the main character is so believable, with his doubts and anger issues and desires on full display, while seeing how he learned about Taoism and tried, not always successfully, to incorporate Taoist principles into his everyday life.  It gave me hope, and a sense that we all struggle with balancing our outer and inner lives.

I can't recommend this book highly enough. If you're interested in learning about Taoism, or just want to understand 20th century Chinese history or the treatment of Chinese immigrants in the United States, get this book.  Fabulous.

Have you ever ordered a book, picked it up and starting reading it, only to find out it was nothing like you expected?  That could be a good thing, as in engaging in an engrossing read or learning something completely new, or it could be not so good, as in when you just can't connect with what the author is trying to say.

I experienced more of the latter than the former while reading Alan Watts' Tao: The Watercourse Way. I'm sure it's just me.  It came highly recommended on Amazon, so perhaps I just wasn't in the mindset to wander and ruminate with the author.

Alan Watts, the British author who came to California in the 60s and became a kind of a hippie guru, has written extensively on Zen Buddhism.  This was his only foray, I believe, into Taoism.  He uses each chapter to explore an aspect of Taoism, whether it be the difficulties of translating from the Chinese, or what wu-wei could mean, the yin-yang polarity, or the Taoist conception of virtuality.  However, when presenting the information or concept, he pulls in references from all sorts of places -- from Thoreau to Zen writings to Confucianism -- in an academic way.  It reminded me of a book I read years ago about Emily Dickinson, which read like a scholar's exploration in abstraction, but lacked any sort of point.  Give me the point, please.

Sadly, Mr. Watts died before completing this book, so perhaps it lacked a fair amount of editing.  Or perhaps this is just how he wrote.  In any case, his co-author, Al Chung-liang Huang contributed an additional chapter, but the book, to me, felt incomplete.  But like I said, it did come highly recommended, so it probably is me.

A Quote for Today


We all must remember one thing: that civil movements create change.  We need to be involved in these movements, whether they be environmental, anti-corporate, animal rights, or any other progressive cause.  In this way we have managed many times to create change: women's right to vote, civil rights, saving endangered species, cleaning up polluted rivers -- the list is impressive. 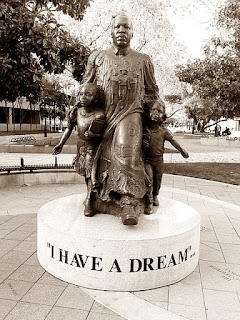 A Quote for Today


It's easy to feel overwhelmed and powerless, but we need to remember that all of these [economic] systems rest on the compliance of millions of ordinary people like you and me.  If we withdraw our consent, if we stop feeling isolated and helpless and start reaching out to friends and neighbors who feel the same way, then we have enormous power.

One of the key ways these institutions take away our power is by making us think our voices are small and worthless.  It's an important political and spiritual act to say, "My voice is worth something."  We have to take civic responsibility and not be stopped by fear or a sense of powerlessness.  Democracy is like a horse: you can't keep it healthy when it's locked in the barn; you have to exercise it regularly. 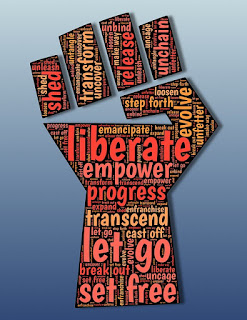