May this day be filled with blessings
and
May you be wise enough to be grateful.
I am grateful for you.  Thank you for reading.
Happy Thanksgiving. 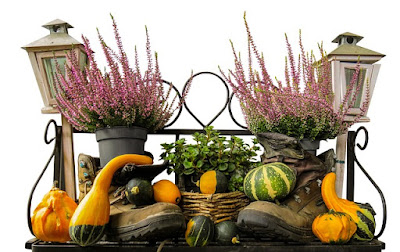 (photo courtesy of pixabay.com)
﻿
Posted by Celina Pavan at 11:14 AM No comments:

Last week we looked that the origin(s) of the Roswell Rock.  This week we're going to discuss what I think the symbol on the rock means.

Do you remember that the solar and lunar bodies are symbols for the masculine and feminine?  Notice on the rock (previous post) that the two circles both contain the symbols of the sun and moon.  Notice that they are both contained in a larger circle that looks very much like an eye.

Here's my take:  when two souls have balanced their masculine and feminine energies and merge as one, they are taken into the eye of the divine.  That's the power, and destiny, of Twin Souls.

Hooey or not, that's for you to decide.
Posted by Celina Pavan at 11:14 AM No comments: Today we delve into the topic of UFOs and their alleged presence in New Mexico (among other places).  Specifically, we are going to look at the Roswell Rock.

On September 4, 2004, Robert Ridge, an auto body shop owner, was walking in the desert around Roswell, New Mexico.  Yes, that Roswell, the site that many believe is where a UFO crashed in 1947, leaving spaceship debris and alien bodies.

Back to Mr. Ridge.  It took four years for him to go public about his find.  Interestingly, the rock is a replica of a crop circle that occurred in Chiseldon, Great Britain, in 1996.

Some have inspected the rock and believe that its fine craftsmanship means that it is of alien origin.  Yet others believe that it was made by MLennium Productions, a company which made stone replications of crop circles.  They are no longer in business and cannot be contacted.  Believe whichever version you wish.

What interests me most, however, is that nobody has discussed what the symbol means.  When I saw it on TV, it jumped out at me that it references Twin Souls.  More on that next week.
Posted by Celina Pavan at 11:14 AM No comments:

A Book on Coincidence and Dreams

I recently read Robert Moss' book The Three "Only" Things: Tapping the Power of Dreams, Coincidence and Imagination.  He talks about how we can use the Field theory to understand our present and even manifest a desired future.  What I found most interesting was his section on dreams.  I guess it's because in The Gemini Bond, the main character, Rissa, has dreams which eventually guide her to meet her Twin Soul.  I know of others who have predictive dreams and this influenced my writing about Rissa's gifts.

Mr. Moss takes it further to explain how to do lucid dreaming, where you can enter a dream in a semi-conscious state and interact with that dream on a different level.  I personally have managed to do that only a handful of times.  Perhaps this book will help you be successful in that.  Interesting reading.
Posted by Celina Pavan at 11:14 AM No comments: