Last week we discussed the eggshell theory of how to protect yourself from other people's unwanted energy.  Today we're going to discuss the river theory.

I've read about this only once, and in passing, but finally had it explained to me by a wise energy healer.  According to this healer, energy is neither good nor bad, but neutral.  If you feel that someone's energy is "attacking" you, that is your judgment; the energy itself is just energy.  The intent may be negative, but the energy itself is not.

Basically, the idea is to take the (neutral) energy that you need (a nice pick-me-up) and let the rest pass through, like a river flowing by.  The energy healer explained that when you put up a shield, like the eggshell theory suggests, you are putting up resistance, which is a real energy drain.  Rather, view all energy as a river which flows.  You can take what you need and let the rest pass by.

I must admit, as an empath, this theory really goes against my usual instinct, which is to duck and run when I can feel someone's energy affect me.  But the idea of not putting out energy in the form of resistance is really appealing.  Try this theory for yourself and see what works. 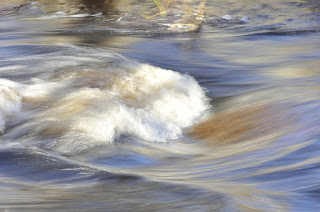 (photo courtesy of pixabay.com)
Posted by Celina Pavan at 11:14 AM