I was recently reading in one of my favorite magazines, The Sun, an interview of Dorothy Roberts (law, Africana-studies, and sociology professor at the University of Pennsylvania in Philadelphia) conducted by Mark Leviton.  The interview can be found in the April, 2019 volume (yes, I am a little behind on my reading).  Here are some fascinating tidbits:


Roberts:  I'm not saying that race is a natural division of human beings that can lead to unjust hierarchies.  I'm saying that the very concept of race was invented to create and enforce such hierarchies.

Leviton:  How old is this political invention?

Roberts:  Certainly hundreds of years old.  The term "race" came into use to distinguish human groups in the sixteenth century when Europeans began to conquer other peoples and enslave them.  To justify capturing Africans and turning them into property, Europeans came to describe them as a separate kind of human being -- or even not human at all.

As soon as people invent the concept of race, they rank races into a hierarchy.  Some people think it's harmless to believe in biological differences between races as long as we don't value one over another, but the whole point of dividing humans into races is to value some more than others.  The inventors of the biological concept of race said that Africans were naturally meant to be enslaved, that it was for their own good, that they were better off being slaves!  These ideas were written into law in the united States during the slavery era.

Food for thought, don't you think?  There's more to come. 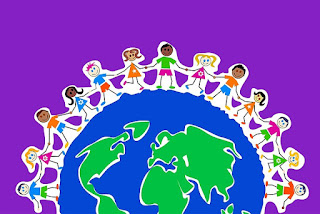