Talking Trees and Other Thoughts

Some time ago I read an article in which certain scientists were studying how trees communicate with each other.  Apparently, trees send out hormonal signals when they sense danger (such as an animal or insect eating them), change the taste of their leaves so repel invaders, and even assist their offspring to grow by shielding them from harsh environmental factors and bringing up water to the smaller trees' roots. And scientists are barely scratching the surface of what trees are able to do. As one scientist, Allen Larocque said, "We don't know what they're saying with pheromones most of the time.  We don't know how they communicate within their own bodies.  They don't have nervous systems, but they can still feel what's going on, and experience something analogous to pain.  When a  tree is cut, it sends electrical signals like wounded human tissue."

But this got me to thinking -- during the times that I have been in empathic contact with trees, what am I "hearing"?  Am I in contact with their pheromones?  Is it some quasi-electrical communication?  Or am I sensing something deeper -- like their essence or even their soul?

But I would like to think that someday humans will realize that they are not the only thinking and feeling species on this planet.  We need to greatly expand our idea of what life is.  Even Mary Oliver, the wonderful poet, has remarked on how stones talk to her.  Who's to say they don't?

And once we make this grand realization that we aren't the only thinkers and feelers on planet Earth, perhaps we will take the giant step to treating all other creatures and rocks and pine cones and trees and dandelions and earthworms with compassion and care.  Wouldn't that be something? 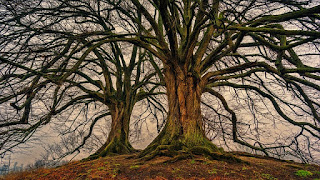