A Terrific Book, as an Overview, Part 2

Last week I mentioned enjoying Eva Wong's Taoism: An Essential Guide.  I did find one section in the book very enlightening, even moving, because it gave the background to a ceremonial practice. Let me explain.

On a Taoist altar in certain sects, there are six rows of items.  In the back is the icon of the deity, with a sacred lamp directly in front of that.  In front of the lamp are two candles; the one on the right representing the moon, and the one of the left representing the sun.  In front of those are three cups:  the center one holding uncooked rice, the one of the left holding water, and the one on the right contains tea.  In front of these are five plates of fruit of the following colors:  black, white, yellow, red and green, going from left to right.  Finally, in the very front is an incense burner.

And here's what I didn't know: each thing has symbolic meaning.  The sacred lamp is the light of wisdom, the original spirit.  The two candles represent both the sun and moon in nature as well as the two eyes of the human body.  The three cups, one each of rice, water and tea, have correlations in the male/female duality.  Tea represents yin, or female energy, water represents yang, or male energy.  The rice symbolizes the union of these two energies.  (Is there a Twin Soul link here?)  The five plates of fruit correlate to the five elements in Chinese cosmology:  wood (green), fire (red), earth (yellow), metal (white), and water (black).  And in the very front, the incense burner represents the fire of refinement and purification.

So this arrangement demonstrates in material form the essential teachings of Taoism.  Progressing backwards from the incense burner, one must undergo the fire of refinement, which then nourishes  the five elements in the body (the five plates of fruit); next, the male and female energies "copulate," that is, become one, a balanced, complete whole (the plate of rice).  This wholeness will shine in the eyes as a golden light (the sun and moon candles), and finally the individual unites with the original spirit (the sacred lamp).  Cool stuff. 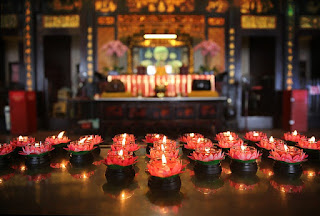