Happy New Year!  Yes, I know it's nearly mid-March, but I realized that I had forgotten to wish you both happy Chinese New Year and happy Tibetan Lunar New Year.

The Chinese New Year started January 28 this year.  It is the year of the fire rooster.  People born this year (or in other fire rooster years such as 1957) are trustworthy, with a strong sense of timekeeping and responsibility at work.  They are active, social, talkative, and popular with people.  Among their shortcomings are the tendencies to be vain, arrogant, and a braggart about their achievements.  Interestingly, the Chinese calendar states that people born during rooster years may experience bad luck during the rooster year.

The Tibetan Lunar New Year started February 27, and also celebrates the year of the rooster.  According to Philippe Cornu in his Tibetan Astrology, a rooster year "is an energetic but scattered year.  There are many opportunities, but concentration is necessary in order to enjoy their fruits.  On the global scale, there is political hardening and repression."

That explains a lot, doesn't it? 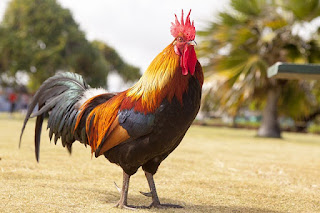